One of the ways to reflect on whether the way you teach is good, or maybe needs some additional tailoring, is presenting your work at the conferences that cover your line of work.

I have been working on the visual grammar for some time, but Topolšica is my debut covering this topic. (Well, some of the most devoted teachers to 'my' approach, have already seen it thoroughly at the seminar 'Visual grammar' in October 2015.)

If you would like, you can have a glimpse of the whole approach in Topolšica, on Saturday at 18.00. The 5 min trailer is clickable below (It is originally meant for Belta Day in Brussels, where I am presenting the approach with the same workshop in April this year): 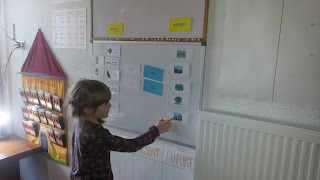 There will also be many other interesting workshops!

A simple game that can be turned into a challenging one

The children had no difficulties recognising and naming all of the words, but putting them into a sensible and correct sentence could be challenging. And here is when 'BINGO' came in handy. 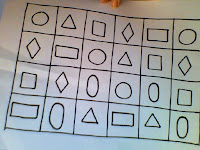 First, a doodle was drawn, consisting of different shapes placed in a table. (4x6)

Preparing the board game 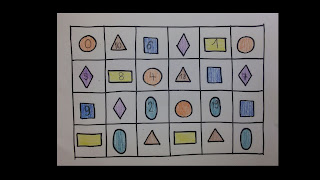 During the lesson, children coloured the shapes in the doodle by dictation: 'Colour the circles orange, the squares pink' etc. (It was a listening exercise and every child had the same shape coloured with the same colour.) If you decide to skip the dictation, children can colour the shapes to their own liking.

How to play the game: the teacher pulls out the CoolTool with the number and says the number aloud. (Does not show it, yet). An option is that children pull the numbers out themselves, in turns.

Children search for the called number and if they have it, they note it by lifting up their arms. One by one children speak out the answers, following the dialogue:
The correct answer:
The winner: