Teacher to teacher observation - 'the tryout'.

And so it happened. They came to my class and watched me perform my teaching.

There were three teachers from two neighbouring schools, all of them already using the early language learning approach I strongly believe in and therefore advocate it.

There were also three Others, from the National Education Institute.

And there was the principal. 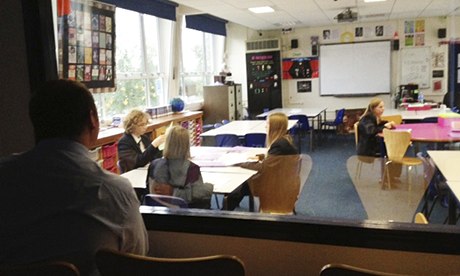 They observed, of course, and after that we had a discussion.


The discussion was supposed to be an exchange of different constructive ideas/suggestions/observations regarding the observed lesson, since the observers had time and an insight to see the lesson from a different perspective while watching me singing, dancing, organising group work and assessing children's cooperation/work/understanding.

Well, not all were allowed to participate in the discussion. There was the One, from the Institute, who despite of all the benefits the teachers could get from such feedback, the three teachers from other schools were denied their presence. The other Two did not mind, but were unfortunately the One's inferiors and thus their opinion did not matter.

The Two 'institution women', to be honest, were being professional. They gave me some constructive ideas regarding grading and confirmed my year's plan of themes, which consists of only four topics throughout the whole school year. They concurred with my view of better having less topics, and making sure those follow all of the curriculum aims, rather than including many topics and only skimming them for words ...  They also praised the implicit way through which I introduce grammar.

And then, there was the One. I had this strange feeling that, since she was called the 'counsellor', she had to counsel me ... for something. Anything.

I will not go into details, for she spoke nonsense and in the same sentence gave a statement as well as the negation of it. I calmly disagreed with her. (I have learned later that she was rather jealous of me for running seminars on early language learning that are supposed to be 'the institutional privilege' especially for being better accepted than the Institution's.)

We met later in a bar, had our private discussion and agreed to continue our professional development through mutual observations.

And here is the comment I received from one of the teachers:

Alenka thank you and hope to see you soon!
Posted by Mija at 17:43 No comments: