There is a big difference between them.

If you seat children together (5-6 of them) and give them a task like "OK, guys. You are a group and I want you to draw a nice drawing of a Christmas tree by the end of the lesson." Most probably two of the kids in the group will set to work and the rest will do nothing to contribute.

On the other hand, if you give each child in a group a specific task in order to complete the common goal, all of the children need to take part in the given task and cooperate if they want to complete the task. This way everyone contributes.

What is the aim of cooperative groups?

If a teacher wants to prepare children to actually do their own work, use their own mind practise social skills and use their own ideas for solving a problem, cooperative tasks are the right solution. There are also other benefits. With young children they are most often related to practising learnt knowledge in a 'we know better together' way.


When first organising a cooperative event, a simple and straightforward outcome should be expected from the children. 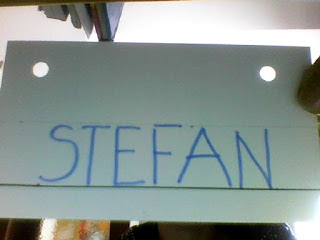 This year I have 110 new pupils, of whom I have to learn all of their names. In order to  help me with their memorising and at the same time making an assignment for children, I came up with the idea of the name tags. This way I could kill two birds with one stone. Setting cooperative groups would present a straightforward experience for children of how to work cooperatively. They already knew how the name tags should look like since they had similar ones the previous year, so the outcome was known to them.

Children (3rd grade) were organised in groups of 4 (7 groups altogether). Each member in the group had their own role to play: One was the organiser, who had to make sure the task was going to be completed on time. Another one was in charge of the Picture Dictionary, the Alphabet House more specifically, for they needed to become familiar how to use a dictionary in order to find the meaning of the words in the instructions. Another one was the secretary, and the last one was in charge to collect all of the tools needed for completing  the task.

Each group got one piece of paper of written instructions (in English) how the name tag is made. To make it clearer, some sketches and pictures were added and the relevant words were written in bold and underlined.

Children were left to their own wits and had to rely on themselves. It pointed out that they MUST NOT come to me with a problem, but rather discuss it with their groupies.

In order to successfully complete the task, each member in the group had to make their own name tag (which needed to look exactly as it was written in the instructions) and all of the words that were written in bold needed Slovene translation next to the English ones. My role, as a teacher, was to monitor their communication and occasionally remind them of their roles.

The children were told they would get a grade at the end of the lesson in order to get the feeling about their performance and to gradually become familiar with grading. It was also pointed out that the name tag was going to be used as a 'stamp' collector for their good work.

The children were completely absorbed in the given task. At the end of the lesson, all of the members in the groups managed to make their name tags although not all of them had followed the instructions thoroughly and correctly.

There was also a list of things that needed to be done/completed in the task. We went through them and each group checked whether they completed them or not. According to their results, they were given the grade. Just as an example, what their work/effort would look like in a number.

Of course. Some children were puzzled when being left to work on their own. They needed quite some encouragement to switch from 'following orders' to 'finding the solution on their own'. For some the 'switch' has not yet come. But the majority of them was enthusiastically experimenting new challenges.

Also, I need to find a way how to lower their voices. They were all rather loud.

Next week I'm doing the same assignment with the 2nd grade children.